Join us for this one day workshop and be introduced to the magical connection with Crystal Skulls! They contain ancient knowledge and open us to a Higher Consciousness.  We will connect with the Ancient Mitchell Hedges Crystal Skull, by creating a grid, and experiencing a mediation to initiate you to the Skull consciousness, and the Ancient Mayan Prophecy.
When you have your own Crystal Skull they are like a friend, always there, talking to you and guiding you, ever if you are not aware of it. Each skull has its own qualities and you will be drawn to the one that wished to share information with you.

Over 80 Crystal Skulls will be in our grid, and some are available to buy if you wish too.

Are you a Guardian of the Skulls!

Join us for this: One Day Event

There are many stories and legends surrounding the Crystal Skulls. . . . .

∞ Over 100 Crystal Skulls for sale. Ancient & Contemporary. Go to Shop:

∞ One to one Consultations & Private Tuition.

According to old American Legend there are 13 Ancient Crystal Skulls, the size of humans skulls, with moveable jaws, that are said to speak or sing.  These skulls are said to contain important information about the origins, purpose and destiny of mankind and answers to some of the greatest mysteries of life and the universe. It is said that this information is not only important to the future of this planet, but vital to the very survival of the human race.  According to these ancient teachings, one day all of the crystal skulls will be rediscovered and brought together for their collative wisdom to be made available, but the human race must first be sufficiently evolved, both morally and spiritually, so as not to abuse this great knowledge.

Left: British Museum Skull. In the mid 1800s two full size crystal skulls, carved from one piece of quartz, were found in Mexico.   A number of 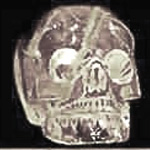 museums at this time became interested by these very old artefacts.  The British Museum, The Museum of Mankind, acquired one of the skulls form Tiffany and Co, of New York, through Mr George Fredrick Kunz, who states that the skull was brought from Mexico by a Spanish Officer before the French occupation. It was sold to an English collector and acquired at his death by Eugene Boban, a French antique dealer, later becoming the property of Tiffany and Co. Now it can be seen in the British Museum. 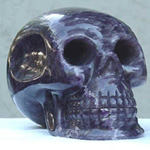 Right:Paris Skull. The second skull was acquired by France and is now in the  Trocadero Museum of Paris.

One of the most famous skulls, found in 1924 is the Mitchell Hedges Skull.